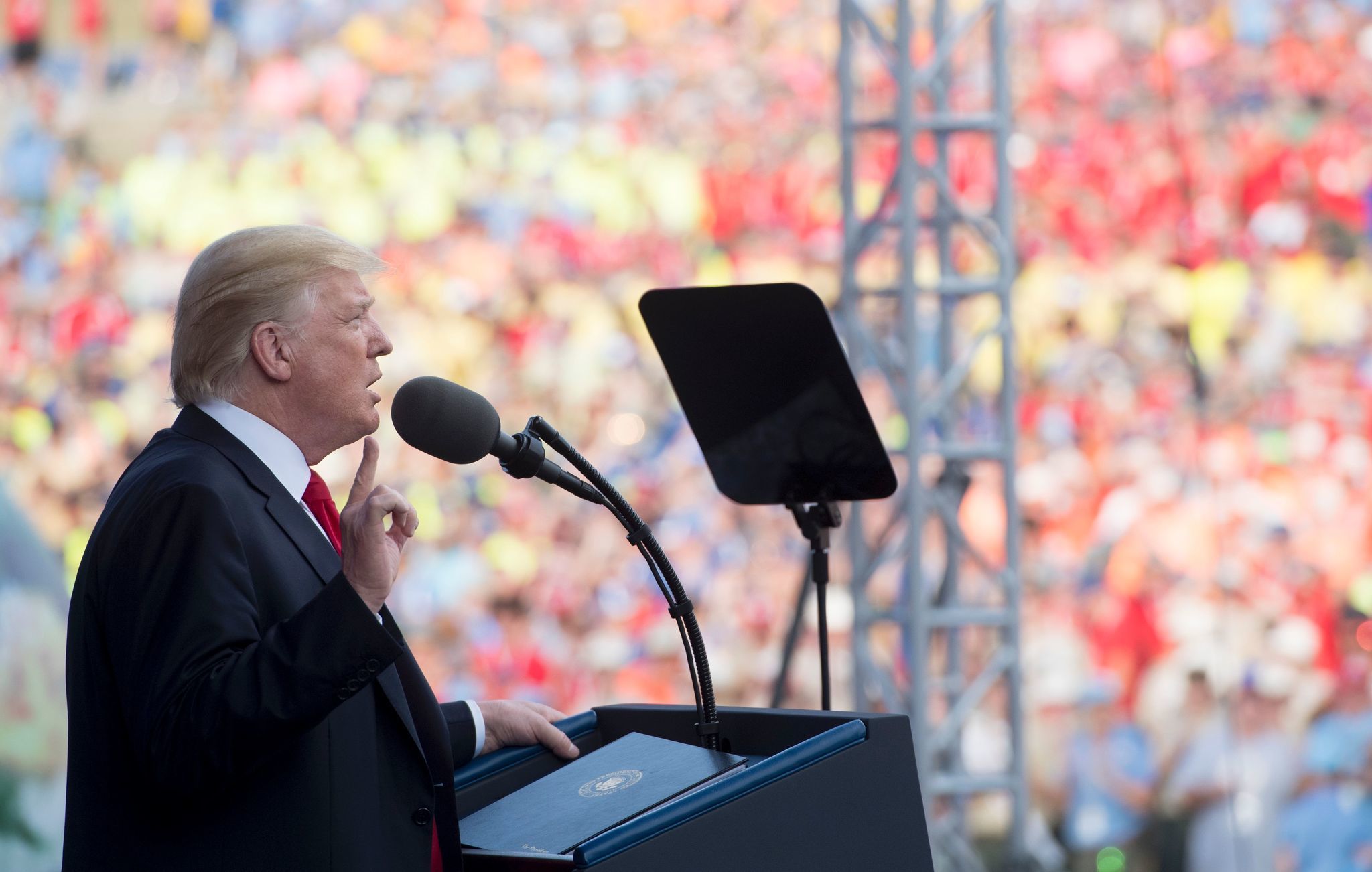 President Trump took jabs at Republican senators, “dishonest” reporters, his predecessor and his 2016 election rival in a rambling and surprisingly partisan speech before about 30,000 Boy Scouts and their troop leaders Monday evening in West Virginia.

In one aside during remarks to the National Scout Jamboree in Glen Jean, W.V., the president asked, “Who the hell wants to speak about politics when I’m in front of the Boy Scouts?” Yet he launched into an extended a critique of Washington politics.

That included jibes at senators in his own party — including by name the home state senator, Shelley Moore Capito — who have balked at ending the Affordable Care Act and replacing it with a still uncertain plan that would cut hundreds of billions of dollars from Medicaid.

“I go to Washington and I see all these politicians, and I see the swamp. In fact it’s not a good place — we should change it from the swamp to the cesspool or perhaps use the word sewer,” he said.

Trump introduced several of his Cabinet members who had been Boy Scouts, including Interior Secretary Ryan Zinke, there in Scout uniform; Energy Secretary Rick Perry’ and Health and Human Services Secretary Tom Price.

Price, the president said, “is going to start our path toward killing this horrible thing known as Obamacare that’s really hurting us.”

“You going to get the votes?” Trump asked Price. “He better get them,” Trump told the enthusiastic youths. “Otherwise, I’m going to say, ‘Tom, you’re fired!'”

He added, “You’d better get Sen. Capito to vote for it.”

The Trump administration and Republican Senate leaders are pressing party colleagues to vote on Tuesday to allow debate on the House-passed healthcare measure so that they can then amend it with a different Senate version. They need at least 50 of the 52 Republican senators to consider the bill, a hurdle made more difficult with Sen. John McCain (R-Ariz.) undergoing treatment for a brain tumor.

Trump praised the Scouts for their pledges to be trustworthy and loyal, and encouraged them to “never quit” and to “do something you love.” But repeatedly he went off script to make political points.

“We could use some more loyalty, I could tell you that,” Trump said of Republicans in Congress. Within the first minute he attacked the press — “fake news” — twice and came back to the subject of “these dishonest people” later.

Of his predecessor, Trump interjected, “By the way, did President Obama ever come to a jamboree? The answer’s no.” When he vowed to kill Obamacare, the crowd chanted, “USA! USA!”

Trump criticized Democratic election opponent Hillary Clinton and recalled at length the surprise of his victory on Nov. 8, boasting of how red he’d made the TV networks’ maps of the states.

In one extended tangent that surely confused many Scouts, Trump described a long-ago cocktail party conversation with pioneering real estate developer William Levitt. Levitt was “a very successful man,” Trump told the Scouts, but sold his business and “lost his momentum.” Although Levitt is considered the architect of postwar American suburbia, he was also known for ensuring that properties were sold only to whites and non-Jews.