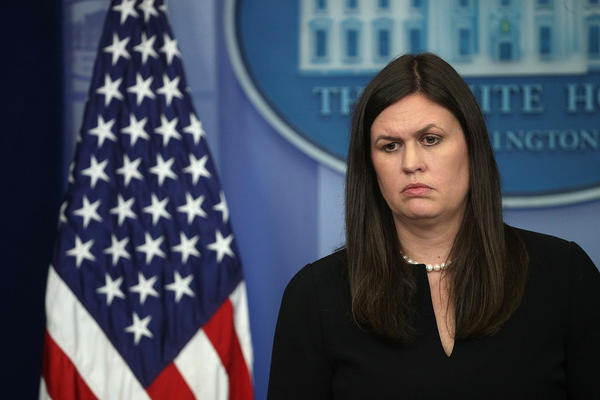 The White House on Monday flatly denied that any Trump campaign officials colluded with the Russian government to influence the election, while referring most questions about Donald Trump Jr.’s meeting with a Kremlin-backed lawyer to outside attorneys.

Deputy White House Press Secretary Sarah Huckabee Sanders instead pointed to what she said was a matter of public record — that the Democratic National Committee worked with Ukraine’s embassy in Washington to coordinate opposition research.

“The only thing I see inappropriate about the meeting was the people that leaked the information on the meeting after it was voluntarily disclosed,” she said.

Sanders also said that the president’s conversation with Putin did include discussion of sanctions applied by the Obama administration in response to the election meddling.

That statement seemed to contradict the president’s own assertion on Twitter a day earlier.

A White House official insisted the two statements were not in conflict because Trump did not raise separate sanctions related to Russia’s incursions into Ukraine.

In a briefing with reporters that was not broadcast on television, Sanders said the president only learned additional details this weekend about the meeting his eldest son had with a Russian lawyer.

“The bottom line is that the Democrats had a weak candidate, and President Trump had a stronger message, and they’re constantly looking for ways to undermine the president and de-legitimize his election,” she added.

It was only Saturday that Trump returned from a brief trip abroad with stops in Poland and Germany, where he met on the sidelines of the Group of 20 Summit for the first time face-to-face with President Vladimir Putin.

Sanders continued to insist, as other officials have, that Trump raised directly with Putin Russia’s alleged meddling in the 2016 campaign, which intelligence agencies have said represented a coordinated campaign to tip the outcome toward the Republican nominee.

But even while it “took up a great deal of the conversation,” Trump didn’t ultimately dwell on it.

“The president heard Putin’s denial and also realized that they had some very important topics that they needed to cover — Ukraine, North Korea, Syria — and decided to move on from that point of the conversation and focus on those issues,” Sanders said.

“He heard Putin’s denial, and he knew that at the end of the day the important part was them being able to have that conversation, for him to directly ask him. He heard his answer and he moved forward with places that they thought they could work together.”

After the president appeared to quickly reverse himself on whether the two nations had agreed to coordinate on cybersecurity, Sanders said the topic was only one of many that were briefly discussed.

“We recognize that Russia is a cyber-threat. But we also recognize need to have conversations with our adversaries. And when our adversaries see strength like they did with the president in the meeting, they can look for other ways to work on shared interests, and look for positive places where they can move the ball forward. Particularly on things like the cease-fire,” she said.

Notably, she said further discussion “may still take place” with the Russian government on cyber-cooperation. “But that’s as far as it is right now,” she said.

The White House instead sought to draw attention to a report featured on a segment of “Fox & Friends,” involving former FBI Director James B. Comey. Trump, in a tweet, incorrectly asserted that the report showed that Comey had leaked classified information.

“I think it’s something that should be investigated thoroughly,” Sanders said.